Daniela Ryf wrapped up her trip to the USA with another win. Two weeks after her victory at the 70.3 Ironman in St. Georges/Utah, she also triumphed in her first long-distance Ironman of the season in Tulsa, Oklahoma.

In her third victory of the season, Daniela Ryf crossed the finish line 5:01 minutes ahead of Great Britain's Katrina Matthews and displayed strong form roughly five months before the Ironman World Championships in Hawaii.

The Swiss’s dominance on the bike track proved to be the deciding factor in her win yesterday. After the swim, Daniela Ryf got out of the water 1:20 minutes behind Pamella Oliveira, but needed only a few kilometres to catch up with the leading Brazilian, before leaving her in her wake midway through the bike course, ultimately extending her lead to an incredible 15:29 minutes by the time she changed onto the marathon course.

The marathon, however, turned into somewhat of a struggle for Daniela Ryf, as her lead eroded considerably on her way to the finish line. Eventually, the Swiss celebrated her third win of the season 8:40:34 hours, but admitted afterwards: “I probably used too much energy on the bike. The final 20 kilometres were hard and exhausting."

Daniel Ryf's next competition is now scheduled for the end of August. On August 28th, Slovakia will host the premiere of the Collins Cup, a team competition between the three teams USA, Europe and International. 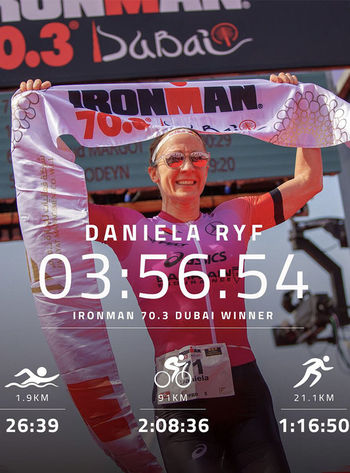